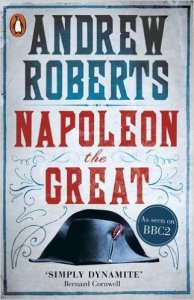 Roberts’ account centres on a romantic account of Napoleon, from modest backgrounds to Emperor, who represented the Enlightenment ideals of rationality, progress and meritocracy. Whilst remarkably realist in painting Napoleon as the socially conservative, middle class, army man that he was, it also takes a positive view of the individual genius that possessed him which briefly awed all of Europe. Another of Roberts’ central points throughout is that many of the legal, cultural and administrative policies of Napoleon, particularly the Napoleonic Code, have endured and long outlived him.

Whilst Roberts’ account of Napoleon as the embodiment of enlightenment ideals is what you would expect from this book’s title, it is often at it’s best when demonstrating the Machiavellian flexibilities Napoleon was capable of.

This is first visible in his acceptance and embracing of the power of France over his native Corsica. His family’s connections to the native Corsican insurgency, from his upbringing in Ajaccio, briefly appears as the most obvious avenue to him, but eventually pales into insignificance against the opportunity afforded to his ambitions by the meritocratic atmosphere of the French Revolution & the chaos of the revolutionary wars.

The book largely centres on Roberts’ painstakingly meticulous analysis of the vast archives of letters that Napoleon produced during his career; and there is also plenty for military buffs with in-depth military studies of each of Napoleons battles and campaigns, something you’d expect from a grand history project such as this. Roberts gives engaging accounts of the near constant wars of the Napoleonic era, demonstrating Napoleons’ often-genuine reluctance for war, but ultimately his own firm belief in his abilities to pull off increasingly audacious victories.

Roberts also excellently captures the many personal relationships Napoleon enjoyed and endured through his life. The most interesting is that between Napoleon and Tsar Alexander I of Russia, which verges on looking like a 19th century blueprint for the ruthless games between US President Frank Underwood and his Russian counterpart in series three of House of Cards.

Immediately taken in by the Tsar’s first words of “I shall be your second against England,” Napoleon forever clung to the idea of a possible truce with Russia through out his many battles with her. After a brief friendship forged from the grand summit of Tilsit, and a later attempt by Napoleon to marry into the Romanov bloodline, the Tsar’s appetite for alliance soured dramatically. Roberts pinpoints this largely to Napoleon’s trade-strangling Continental system and his Machiavellian tactics of fostering local support in the East by encouraging a nascent Polish nationalism.

Tsar Alexander I’s biding of time to destroy Napoleon hangs over much of the book and early glimpses of the hubris upon which most popular interpretations on Napoleon are built upon begin to appear. The most obvious comes with the French Emperor’s statement in a letter that French armies could surely overcome any climate or arduous environment, noted during an early pursuit of the Duke of Wellington in the mountains of northern Spain.

Although what is most interesting about Roberts’ account is it’s definitive break with the common mode of interpreting Napoleon as an absolutist ruler with a hubristic ego.

The infamous 1812 Russian campaign is the best example as it receives analysis that goes much further than merely painting the Emperor as hell bent on invading the known world, but is presented as a logical reaction to a long chain of events and influences, many of which were beyond Napoleons’ control. The horrific nature of the campaign, through its never ending marches, murderous weather, ravaging diseases are also masterly captured, culminating in the grand spectacle of the burning of Moscow by it’s inhabitants to snatch it from Napoleon’s grasp, from which his fortunes do not really recover.

Ultimately then this book is a traditional addition to the ‘great man’ canon of history but manages to achieve a remarkable amount of balance. Whilst clearly having a positive view of Napoleon’s un-doubtable achievements and legacy, Roberts’ is obviously not blind to his massive shortcomings. The most central are a lack of appreciation of naval power, particularly after the destruction of the French fleet at Trafalgar, fed by a self-centred belief in the prestige of land armies and battles. This, coupled with the continental system he constructed from the Baltic States around the European Continent’s coastlines to the border of the Ottoman Empire, formed the master plan for a French dominated Europe which strangely ignored the naval, commercial and economic might of his gravest foe against the channel.

It is this balance that makes this book a must, although very long, read for anyone interested in moving their understanding of such an important historical figure like Napoleon beyond the understandably popular bias of him merely as a crazed dictator as well the central point of Roberts’ admiration for Napoleon: that his dramatic rise, fall and legacy demonstrate the ability one individual can have upon history. 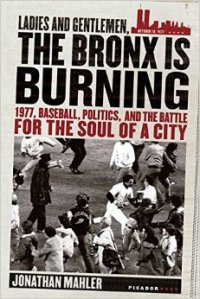 My friend was reading this book during our recent trip to New York. I asked to borrow it when we were back in the UK to prolong my NYC buzz and to help wade off any post-holiday blues which surprisingly have not yet struck. I partly put that down to this book. Written by Jonathan Mahler, a New York Times reporter who follows you back on Twitter, it is a remarkably accessible account of New York in 1977 centred around two major themes: the New York Yankees and their topsy turvy season and the savage election battle for the city’s mayoralty.

These stories are told through characters so bizarre and fascinating that you repeatedly have to remind myself that they were/are real people, and not merely created for the purpose of the unfolding drama. The most intriguing are the alcoholic Yankees manager, Billy Martin and his team’s rebellious new superstar Reggie Jackson. Being 1970s New York the clashes focus on race, monies and egos, and although one of eventual redemption, it is indeed a rough ride.

A basic understanding of baseball may foster greater enjoyment for these parts. However I have essentially none and it remains possible to blag and still enjoy due to Mahler’s brilliant profiling and the sheer wealth of material history provides him. The highlight is a famous bust up in Boston where Martin was visible on national television being physically restrained from attacking Jackson after a costly casual field. Fortunately this remains visible on YouTube.

The mayoral election theme is more for political buffs as it centres on the Democratic Party’s machine politics and gives a useful study of the unpleasant intricacies of negative and fearful political campaigns. It also reveals the absolute centrality of race to the city’s recent history and its trauma. Gross fiscal mismanagement, socially crippling unemployment and bitterly opposed new housing projects are all given starring roles in what at times could seem a mere tract on urban decay and the death of a great city. The economic and social depths to which New York stooped to this period, something which Mahler points out was a US-wide perception, and the perspective of the cities recovery since reminds readers that, thankfully, seemingly doomed cities can, and do, recover and that most importantly it is it’s people and their unique characters which drive this.

Much like the city itself these main attractions are supported by a wealth of interconnecting side streets brimming with their own wonders. The chapter on the city’s blackout, the subsequent widespread looting and violence and the struggles of the police on that stiflingly hot night of July 13–14, 1977, is a short story worthy of publication in its own right.

There is also a chilling section on the serial killer dubbed the “Son of Sam.” The drip-drop narrative of fear taken directly from the city’s newspaper headlines is as perfectly charted as his eventual capture due to bumping a fire hydrant with his Ford Galaxy. There is also a hilarious moment when the incumbent Mayor mistakes the handcuffed killer for the detective who had caught him, amidst the scrum leading him to custody, in front of a media which was more than happy to continue making their crust off of this killer.

At many times during reading I thought that these stories sound perfect for TV, so I’m delighted to have just discovered there is an ESPN miniseries based on the book. I’m off to find that now.

I get through quite a few books on my commutes into London and post the book reviews on this site. If that doesn't grab your interest then I'm a Dutchman.